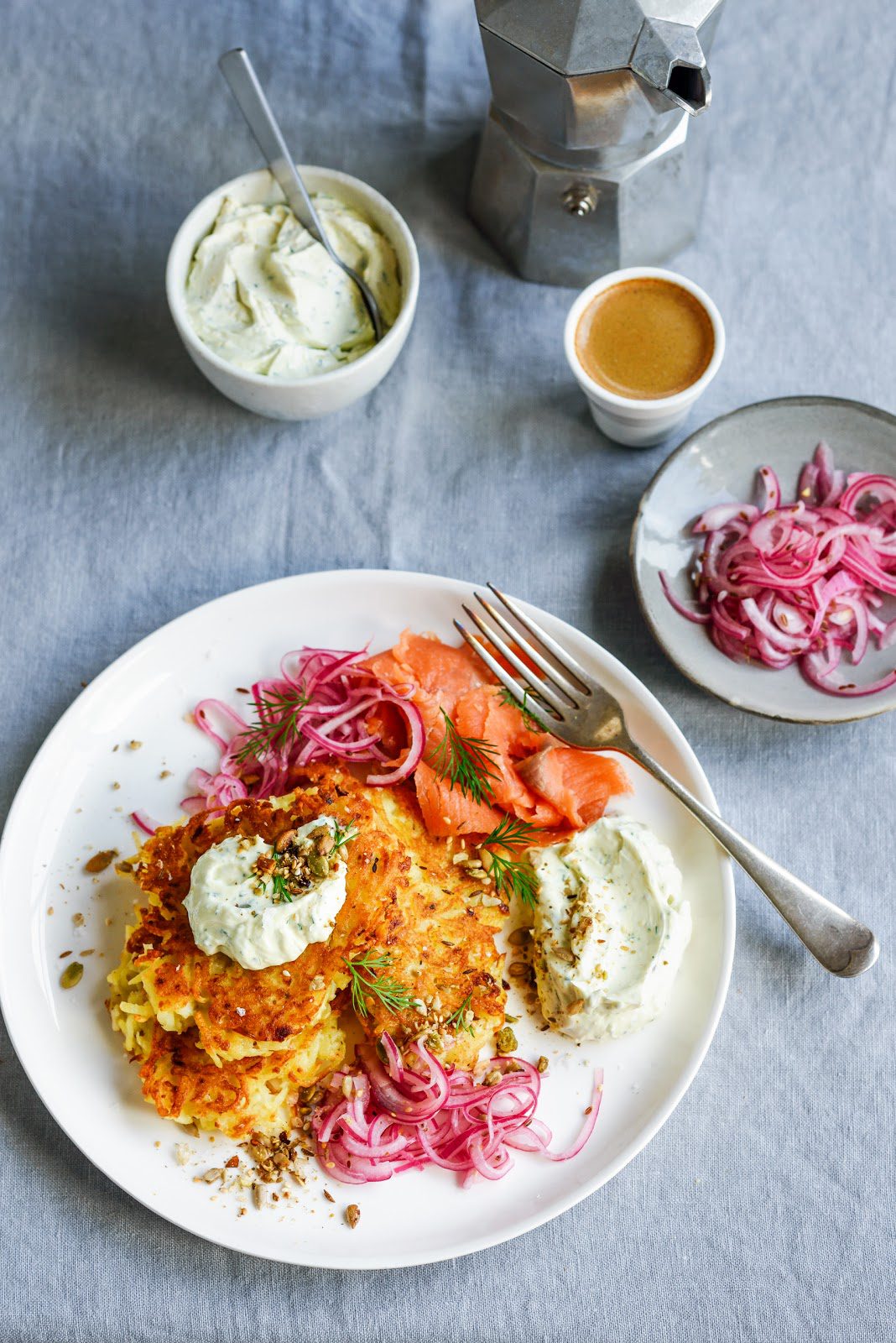 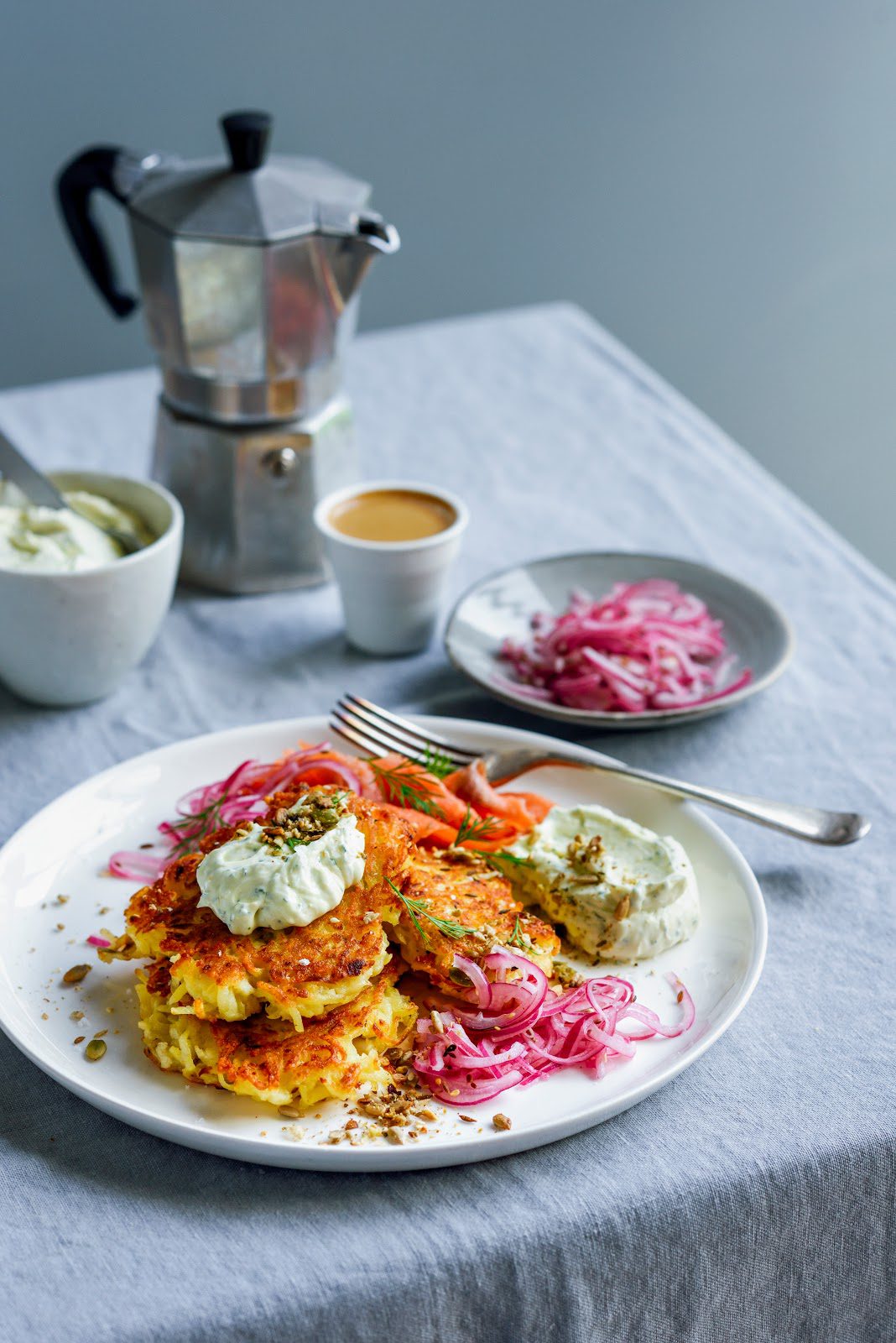 L’il re-post of this recipe from October last year. My apologies but I have been so flat-out with the book and work, that things have been a bit quiet on the bloggie front lately. Counting down to final deadlines and then it will be back to business as usual 🙂 I can’t wait to give you a few sneak-peeks from the book in the coming months…but in the meantime, these latkes are bloody good!Good morning from an overcast but not unpleasant Wellington. I am lying here (in bed in the hotel with a cup of tea as usual) wrangling my blog format – for some reason it has been glitching lately…a bloody nightmare! (Hence the bollocking great indent above – I have been trying to remove that gap for the last 15 minutes – why is it there? It is not usually there? Arggggghhhh…and now it is no longer there, thanks so much Philip Sole Web Design!). Any waaay, I am in Welly to see the beautiful Hoob who turns 19 years old today! Unbelievable that my gorgeous little man, such a cheery, enthusiastic perky sausage is now a man, 6 foot and strapping, almost through his first year at uni and basically ‘out in the world’…God I wish I could go back in time for five minutes just to smell his stinky little feet and give him a massive cuddle…

Due to his study commitments and my workload it is just a super fleeting visit to wish him a happy birthday – last night we hung out at Mexico drinking margaritas and blindly adding the hottest sauce they have (that would be me) to the soft shell taco (with slow cooked lamb, ancho & coffee adobo, corn mayo, spiced chickpea), and this morning we’re heading down to Olive for Brunch. Gah – it’s so weird – I’ve already been through this with Henry but round two with Rich is no easier…to think your babies are grown men is so strange, and in these new adult bodies that they present to the world, I can still see their 7-year-old selves. I couldn’t be prouder of them both.

Right, to the food! It seems appropriate that today’s recipe is a brunch-y one (although I would definitely eat this for dinner), inspired by a meal I had on my recent trip to Brisbane. Crispy potato latkes shallow fried in a wee bit of coconut oil, with a side of thinly sliced smoked salmon, quickly pickled red onions and a very versatile feta and cream cheese whip – so you have crunchy spuds, sharp, vibrant onions, salmony (haha) salmon and slightly salty, creamy whip topped off with aromatic crunchy dukkah and a few sprigs of fresh dill. If you fancy top everything with a gently poached egg…not essential but it’d also be fab. I popped the recipe together for Fairfax – so given that it will be in the newspaper in Welly today, I will actually be able to see it in print! Have a good one… 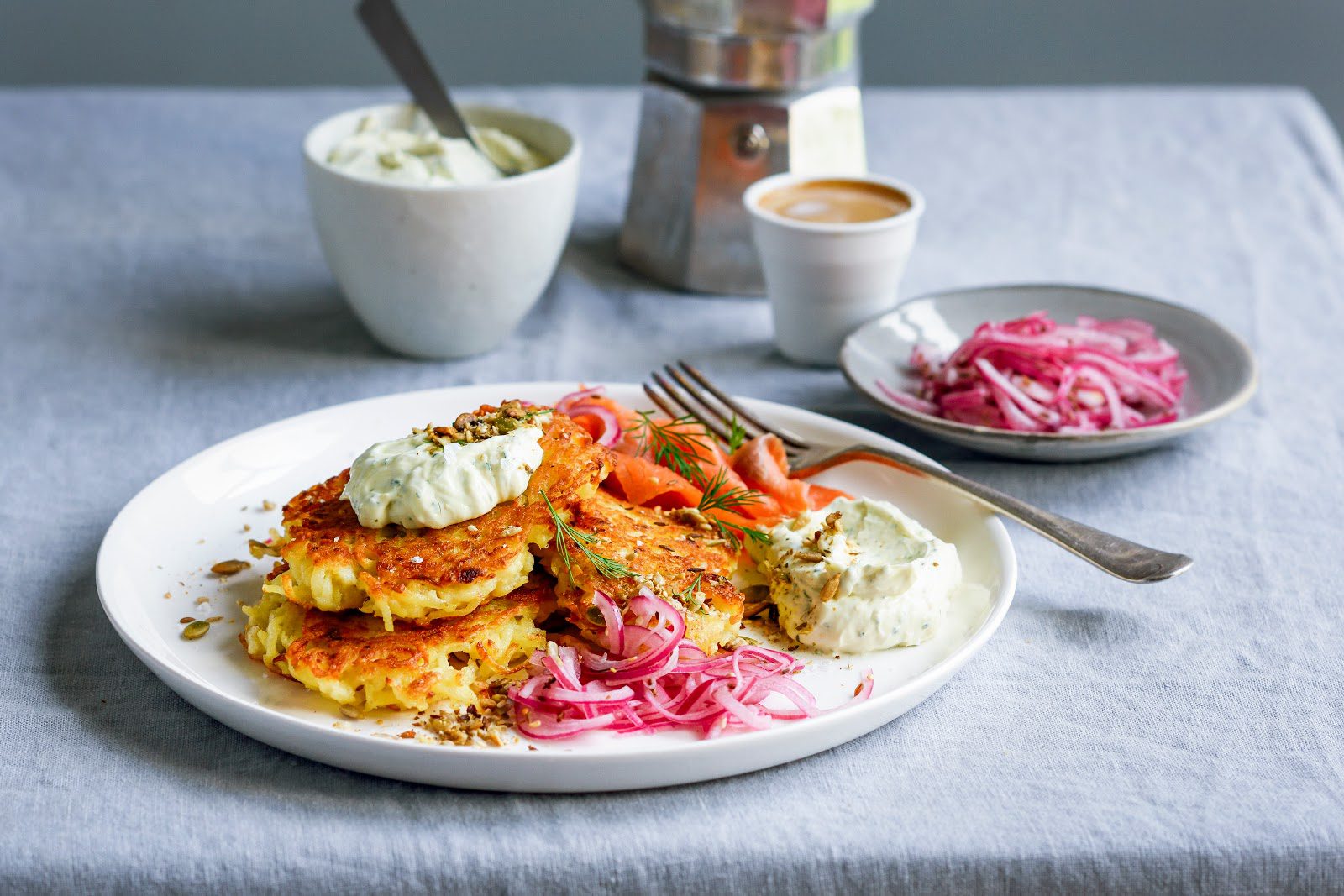 Whisk the cider vinegar and sugar together until the sugar is dissolved. Add the sea salt and dill seeds to the vinegar. Put the sliced onion in a non-metallic bowl and pour over the pickling liquid. Refrigerate, covered for 45 minutes (and up to 3 hours ) before serving.

Put the cream cheese, feta, lemon zest and dill in a small food processor and whiz until smooth. Transfer to a serving bowl, cover with plastic wrap and refrigerate until 10 minutes before serving. Peel and grate the potatoes – using a food processor with the grater attachment is a quick and easy way to do this. Immediately line the grated potatoes up down the middle of the inside of a clean tea towel. Roll up like a sausage in the tea towel and twist the ends as hard as you can to squeeze out as much liquid as possible. Put the egg in a large bowl and add the salt and flour. Whisk them together, then add the dried, grated potatoes. Mix well to combine, then leave the mixture to sit for 5-10 minutes. Mix again. Heat half of the coconut oil in a large frying pan (adding more when necessary) and cook the latkes, 1/3 cup at a time, in batches, for 1-2 minutes each side, until golden and cooked through. Serve immediately stacked with feta cream cheese smear, a garnish of dill and a mound of pickled red onion. Makes 6