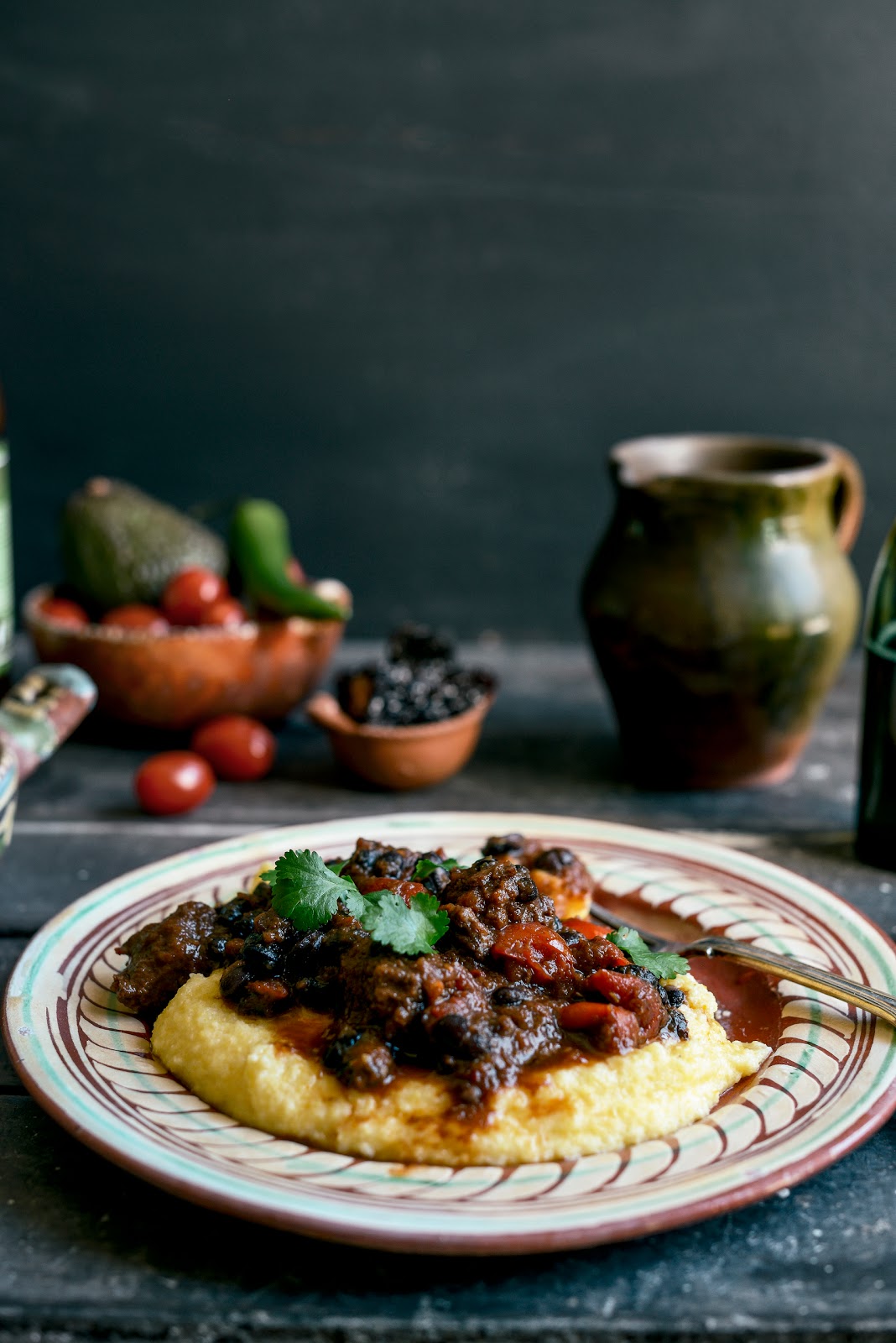 OK – so this is what I wrote a couple of weeks ago – and I have finally re-made it! I am sitting here typing this on my laptop at the dining table feeling a little bit chilly and in need of a shower – this is day two of a massive power-cut in Auckland with initially 85,000 homes affected and now just 18,000 left in the cold – and that would include us! If I could make anything for dinner tonight it would be this!!! However, I will just have to wait until the power is back on and then I will be recreating this to photograph – one of the dinners I was on a promise to make, and did, for Henry on his last trip up from Wellington. You can either serve this with polenta/corn bread balls popped on top, on tacos or, as I like it, on soft cheesy polenta – the choice is yours. (As per the fish taco recipes, forgive me if the recipe is inauthentic, it is merely my interpretation, but I can promise you it tastes bloody good!)
Mexican braised beef cheeks
1 dried smoked chipotle pepper
½ cup boiling water
2 onions, roughly chopped
4 cloves garlic
1 tsp smoked paprika
1 tbsp cumin
1 tsp coriander
1 tsp cinnamon
1 tbsp dried oregano
2 tbsp olive oil
Sea salt and freshly ground black pepper
1.5 kilos beef cheeks, trimmed of fat, cut into 3cm pieces
¼ cup brown sugar
1 x 400g cans chopped tomatoes in juice
1 x 400g can cherry tomatoes in juice
1 x 400g can black beans
2 avocados, sliced
Juice of half a lime
1 cup sour cream
1 cup coriander leaves
Tacos or polenta to serve
Put dried chilli in a small bowl and cover with boiling water. Leave to soak while you get on with trimming and chopping the beef cheeks (such a faff, but worth the effort), then season these well with sea salt and freshly ground black pepper. In a food processor whiz onions, garlic, and herbs and spices. Remove chilli from soaking liquid, roughly chop then add to onion and spice mix and blend in a food processor until roughly smooth if you know what I mean – not a puree, but not too chunky! Heat oil in a big heavy based stove top casserole dish and add onion mix. Cook over a gentle heat for 12-15 minutes until onion is softened, stirring occasionally so that it doesn’t catch on the bottom. Turn heat up to medium and add beef. Cook for about 15 minutes, stirring so that the meat is well coated, then add brown sugar and tomatoes. If you like a hotter chilli add the reserved chilli soaking water, if you’re more keen on hot but not ‘on fire’ add half a cup of water. Turn the heat right down, put the lid half on, and cook for 3 hours. Remove the lid and cook a further hour so that the cooking liquid is reduced and the meat is super tender. In the last half hour of cooking add the rinsed, drained black beans. You can either serve this on tacos or soft polenta, topped with sour cream and a big handful of coriander. Pass chopped avocado on the side for anyone who needs a little extra heat-mellowing action. Serves 6. Just a wee note here, you don’t have to use beef cheeks you can substitute stewing steak no problem, it’s just that beef cheeks do go extra specially soft and slightly gelatinous – sounds gross, tastes amazing!!!
Polenta
500g quick-cooking polenta
1 litre water
1 litre milk
plenty of sea salt and black pepper
1 cup grated tasty cheese
50g butter, cubed
Heat water and milk in a large pot until almost boiling. Add polenta in a steady stream, whisking constantly as you do. Continue stirring on a low heat for about 3 minutes. Add cheese and butter and season well with salt and pepper. Serve immediately. 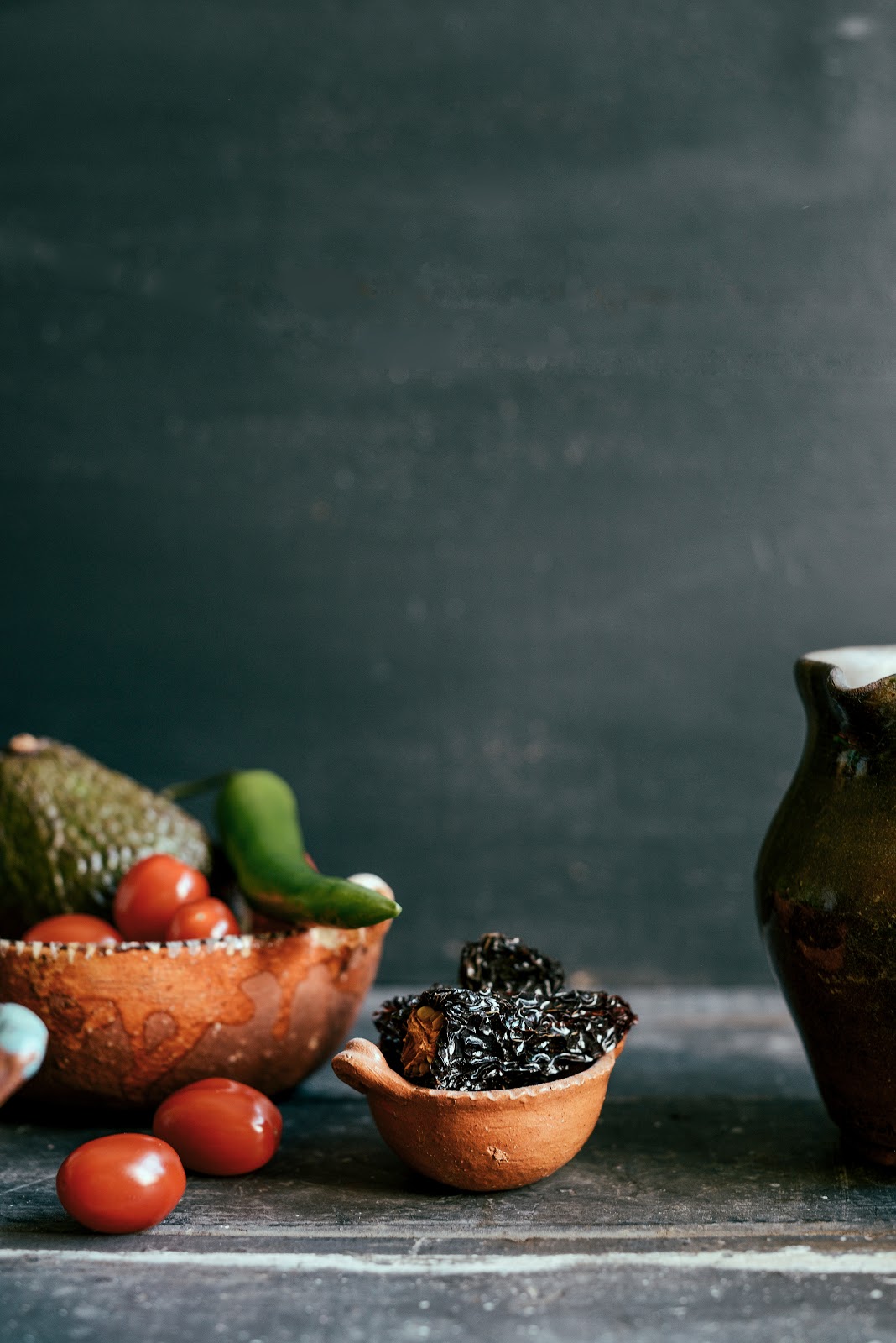