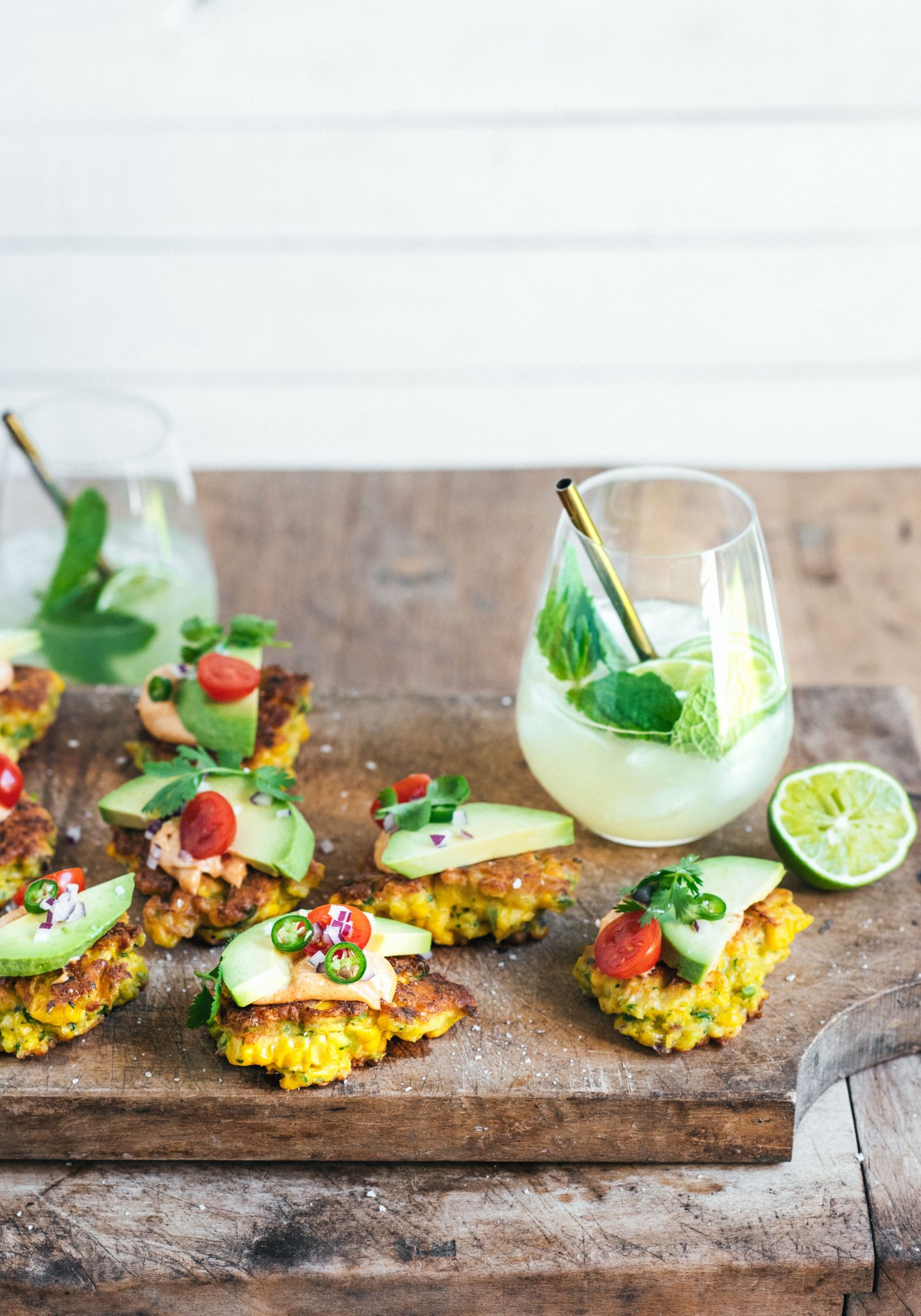 Hello friend. (Admittedly late to the party and now watching Mr Robot having seen Rami Malek in Bohemian Rhapsody). It’s been a while! Today I have a variation on an old favourite recipe – chunky corn fritters made using kernels sliced from the cob, given a garlic and chilli kick, topped with avo, more chilli (as much as you fancy), coriander and luscious, sweet smoked paprika mayo. Essentially the perfect bite to have with a gin mojito or a cold beer on a sunny afternoon…which I have faith will be coming at some stage. This would also be a great nibble to serve over the Christmas/New Years break, if you’re lucky enough to find yourself at a bach somewhere…

God I wish I was at a bach right now – it has been a busy few weeks trying to get myself sorted to sell my house (spectacular timing right?) which now probably won’t happen until 2019, while also looking for a new place. I must confess the move is long overdue and I will be hanging out to make it all happen as soon as I can. Apart from that it has been business as usual except for my quick jaunt down to Welly to see the men/boys. Rich is in job hunting mode so we went suit shopping (he looked utterly gorgeous), followed by a bloody fabulous dinner all together with Raven and Mark. I slept at Pog’s on his surprisingly comfortable futon and zoomed back bright and early the next morning. Is it normal to have so much fun with your own kids? I don’t know, but I always have such a bloody fantastic time with them, I came back on a total (short-lived) high. Right now I should be up and cracking, with a Smith & Caughey’s gig next week to work on (more on that later), a baking post to submit and a particularly fetching cheesecake loitering in my fridge, waiting to be photographed there is much to do.

Bring a large pot of water to boil and drop in the corn cobs. Boil for 10 minutes then drain, refresh under cold running water and leave to cool for 15 minutes. Put the garlic in a food processor with the spring onions, coriander, red onion, chilli, lime zest and eggs and whiz to combone. Slice the corn off the cobs (by holding each upright by one end and slicing downwards onto a chopping board). Put 1/2 of the corn in the food processor and add the flour and corn flour. Pulse just until it all comes together in a chunky fritter mix. Tip the mixture out into into a large bowl, add the remaining corn, astirring through to combine, and season well with salt and pepper. Cover with plastic wrap and chill in the fridge for half an hour. While it is chilling, whisk the mayonnaise with the sour cream and paprika. Heat half of the oil in a large frying pan and drop in ¼ cup quantities. Cook fritters for 1-2 minutes each side and drain on paper towels. Serve with a dollop of paprika mayo, a slice of avocado, half a cherry tomato and a sprinkling of red onion and fresh coriander. Garnish with a few slices of green chilli if desired. Makes 16-20 depending on how big you make them.

Put the sugar and water in a small pot and bring to a boil. Whisk to dissolve the sugar, reduce the heat to a simmer, add the lime peel and cook gently for 10 minutes. Remove from the heat and cool. Put the lime juice and mint leaves in a cocktail shaker and mash together with the end of a rolling pin. Add the sugar syrup and gin (or tequila) with ice and shake to chill and combine. Drop extra ice, lime slices and mint into sevring glasses and strain mojito mix, dividing equally between the glasses. Top with soda to taste – a splash or up to half a cup as desired! Makes 8