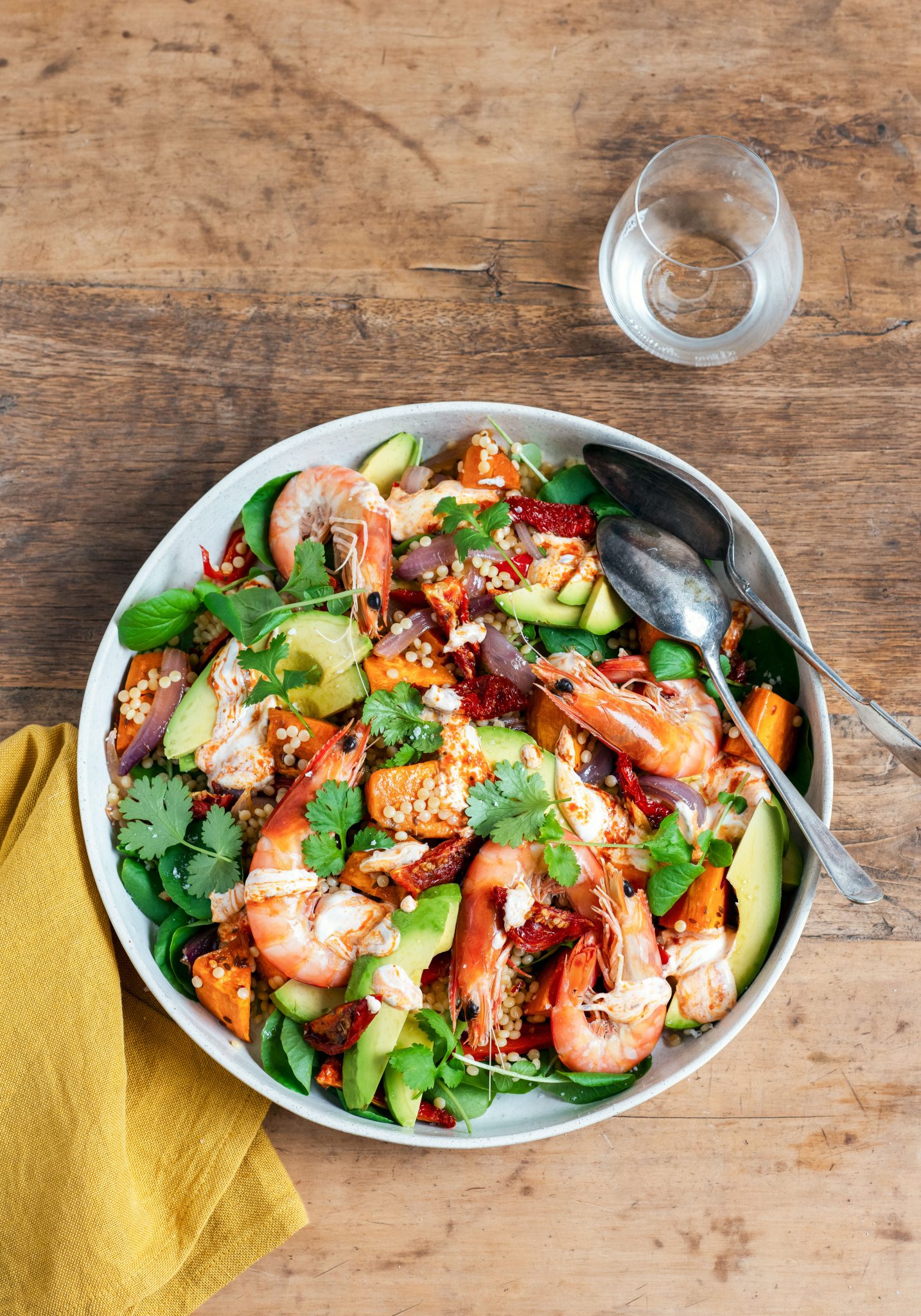 Well hellooooo – here we are three weeks into 2019 and I feel like I’m properly ‘back’ (even though I never really went away…). This recipe is one I put together for Fairfax, so appearing on Stuff, and in newspapers around the country today – and it is bloody delicious if I say so myself! Sweet cuminy, roasted kumara, red onion and capsicum are combined with pasta-like Israeli couscous, peppery cress, intense semi-dried tomatoes and creamy avocado. Add a few luscious prawns and a good dollop of harissa-spiked yoghurt mayo and you have an all-in-one salad that is delicious (and flash) enough to share with friends, but that also makes a perfect next-day work-lunch. Seriously good flavours. (Feel free to swap the couscous out with the grain of your choice – brown rice, quinoa, freekeh etc – go wild!)

And what else? I have just submitted my next Dish spread which I know you are going to love (autumn issue, so a wee way to wait), and have been getting down to business with the book. I get such a kick out of seeing it come together, but have to temper my impatience at wanting it done NOW…good things take time. Apart from that I have had lots of lovely evenings out and about, catching up with friends for drinks and dinners as well as a few chilled movie nights. (Orson Welles – fascinating films to watch from a photography perspective as much as anything else…all that wide-angle lens action and massive depth-of-field). As usual I have been trying to balance indulgence with exercise (it’s an on-going battle), with my regular power-walks (yup, Kath Day-Night has nothing on me), and gym sessions, but stuffed things up spectacularly by running up the stairs the other day and twisting my knee. Reduced to a hobble, but for one day only, I am trying to get enthusiastic about the exercycle…

Finally I am (as usual) super-excited to have both of the men/boys nipping up for short visits in the next two weeks, first Hoob and the darling Raven this weekend (we three are heading to a 21st together, should be a hoot), then the following week Pog will be zooming up for a few days too. Hurrah – such a treat – it’ll be all gluten-free vegan action in the kitchen, bring it on!

Preheat the oven to 180˚C. Put the olive oil and red onion in a large roasting dish. Cut the kumara into 3-4cm pieces, core the capsicum and slice into 1 cm wedges. Add the kumara and capsicum to the onion, season well with salt and pepper, cumin seeds and chilli flakes and toss to coat in the oil. Roast the vegetables for 15 minutes then remove from the oven and turn kumara pieces over. Drizzle with honey and return to the oven to cook for a further 10 minutes, then remove from the oven and set aside. Bring a large pot of water to boil, season with sea salt and add the couscous. Boil for 7 minutes then drain well. Add to the dish of roasted vegetables and toss so that the couscous absorbs some of the seasoned oil. Leave to cool to room temperature (or refrigerate to use later).

Put the yoghurt and mayonnaise in a bowl and whisk to combine. Add the harissa and swirl through so it is semi-combined. To serve, spoon a few tablespoons of dressing onto the bottom of a large serving plate and top with 2/3 of the watercress. Layer on 2/3 of the vegetables then remaining watercress, avocado, semi-dried tomatoes, prawns and coriander leaves. Sprinkle with sea salt and black pepper, drizzle with mayo dressing, and serve a little extra dressing on the side.