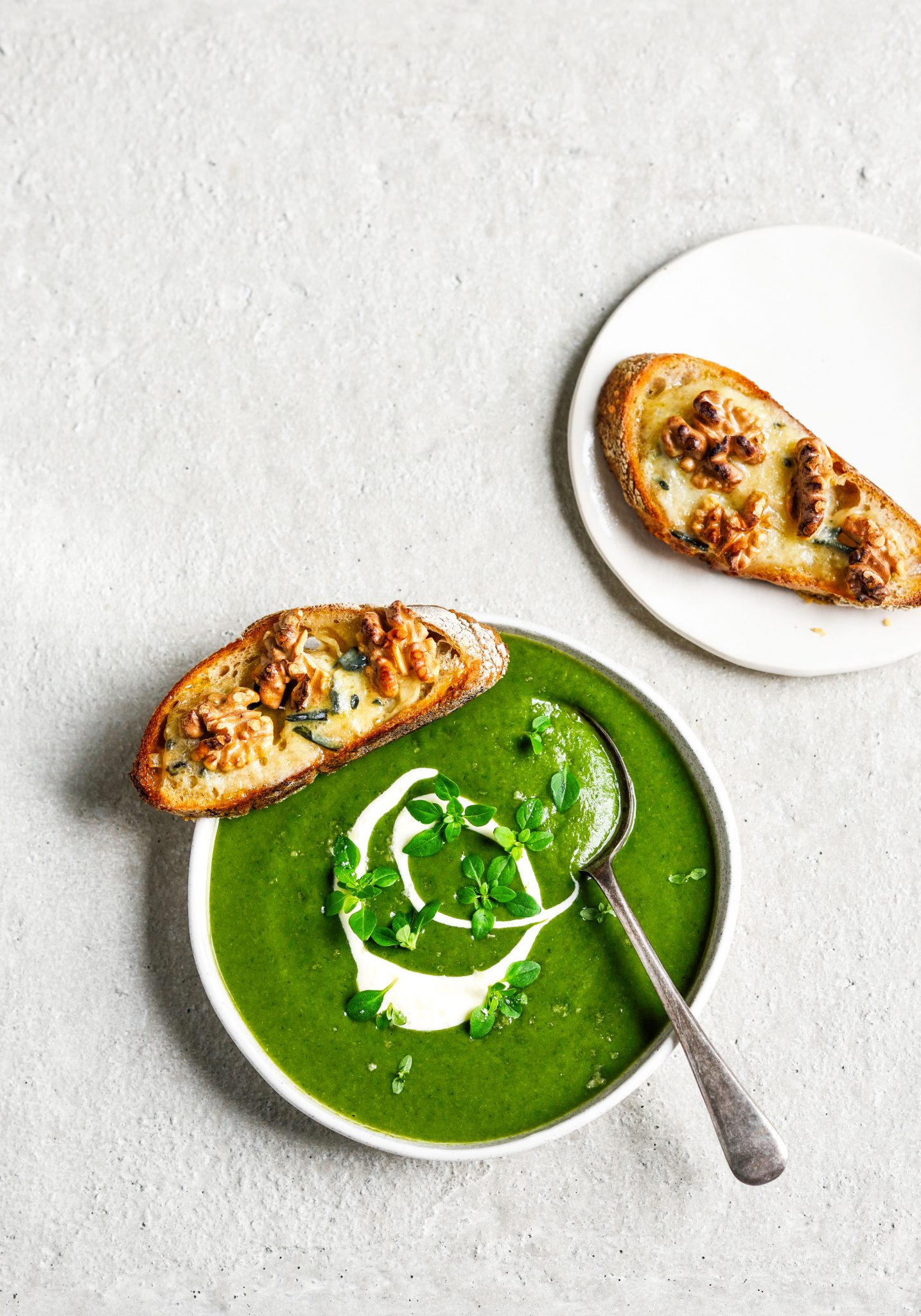 Happy Sunday morning to you! I thought I had better get my act together pronto after being away for the last two weeks, and this soup seems the perfect way to start – the broccoli and intense iron-rich spinach are enhanced with sweet onion and leeks, then given a l’il kick with fresh mint, a hit of fire from cayenne pepper, and brightness from zingy lemon. It has a healthy yet comfy feel-good factor that works like magic for a Sunday night, easy dinner. The blue cheese, walnut sourdough toasts are a whole different thing – pure indulgent naughtiness – they’re bloody brilliant with the soup (or French onion, mushroom, cauliflower or chicken soups) but are equally good served as a snack with early evening drinks, seriously, let me know if you give them a try, you won’t regret it!

Right then, in other news, Rich and I arrived back from Rome late Wednesday night, he was back on a plane (complete with budding eye infection and a suitcase of rapidly washed and dried clothes) on Thursday. Then Friday morning I was bright-eyed and bushy-tailed (kind of to be fair – bloody woke at 4am so probs looked a bit knackered) at my latest freelance job – working alongside the brilliant team at My Food Bag, filling in for a food stylist heading off on holiday. God the set up is so slick in the kitchen/photography department I had a wee twinge of the green-eyed monster at the resources on hand! So next week I will be doing my thing in a nine-to-five capacity which makes a fun change, before getting back to shooting the next issue of Dish the following week. (Was seriously excited to return from Europe to see the current issue, with my first ever Dish cover recipe, styled and photographed by me…such a buzz). So, ha, no rest for the wicked.

Meanwhile Hoob is straight back into uni after being welcomed home by the gorgeous Raven, lucky man/boy, and working hard at Timberland in his ‘spare’ time. Pog has returned to England and is working at Markington Hall in North Yorkshire, as part of his wwoofing experience. It looks absolutely stunning, with beautiful gardens and a rich heritage (including being inherited by William Wilberforce, whose descendants still own it) and he is right at home gardening and whipping up floral arrangements for a weekend wedding. Right then – loads to do, so time to get up, (still writing these propped up in bed with a vat of tea), I have about a billion pics to edit from our trip, but once that’s done I’ll be posting a big ole blog post about Hvar, Dubrovnik, Florence and Rome…see you soon.

Put the oil and butter in a large heavy based pot and heat together until melted. Add the onion and leek and season well with sea salt and freshly ground black pepper. Cook over a medium heat for 8 minutes until soft but not coloured. Add garlic and cook a further 2 minutes. Add potato and broccoli stalks and stock and bring to a gentle boil for 15 minutes. Add broccoli florets, cook for 5 minutes, then add spinach and cook a further 3 minutes. Remove from the heat and add 3 tablespoons of the cream, mint leaves, cayenne and lemon zest. Use a stick blender to whiz until smooth. In a small just whisk the remaining cream and yoghurt. Serve the soup with a swirl of cream mixture, a sprinkling of sea salt and black pepper and some fresh soft herbs such as parsley, mint or basil.

Preheat the grill and put the sourdough slices in an even layer on an oven tray. Grill until lightly golden then turn over and spread with blue cheese. Divide walnut pieces over cheese and grill until the cheese is melted and the walnuts lightly toasted.