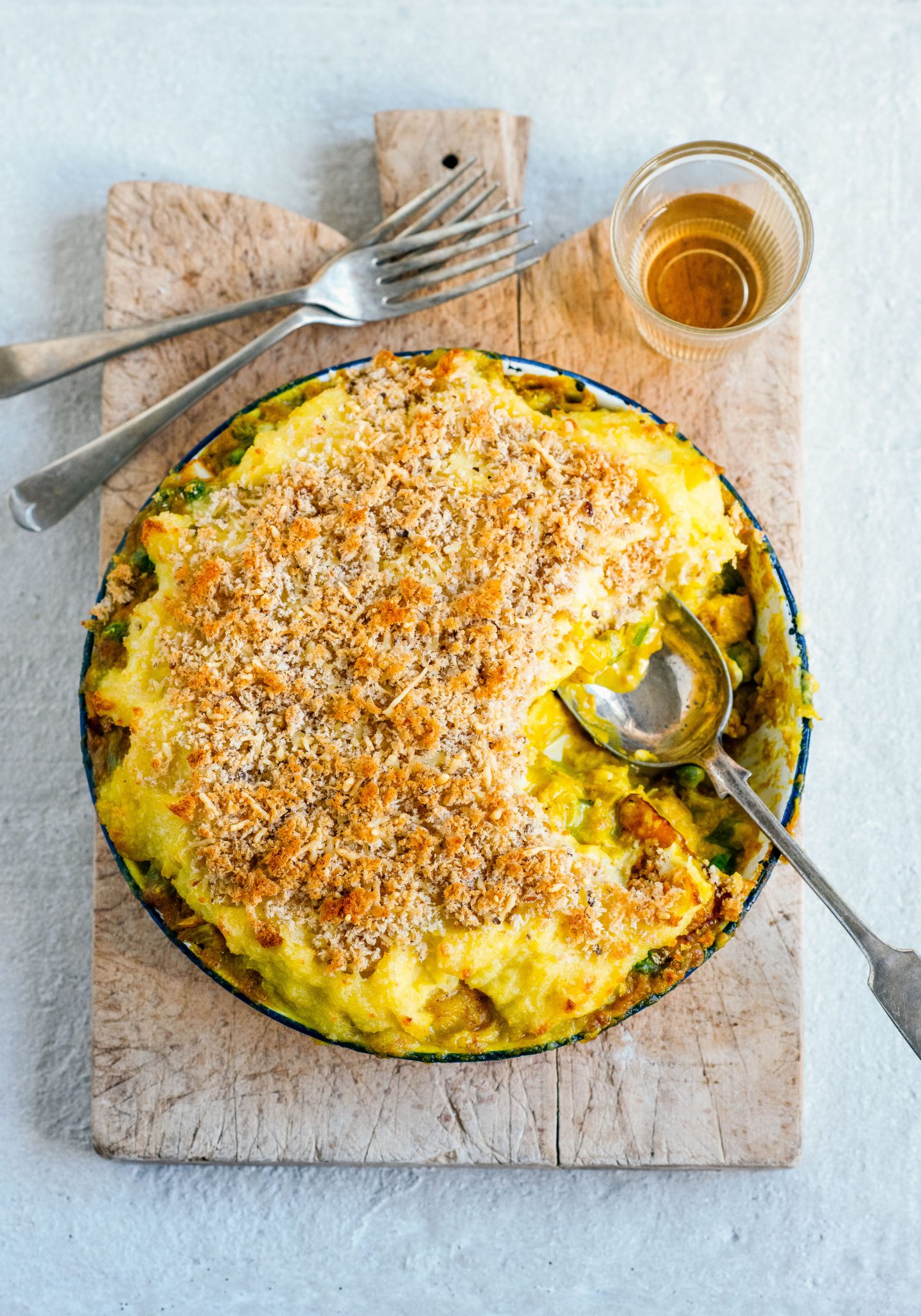 Gooooood morning, and I hope you’re having a lovely weekend! I was thinking this could potentially be your perfect snuggy, Sunday night dinner – a smoked fish pie/kedgeree combo that is warming and comforting, with a wee spicy kick tempered by soft mashed spuds and a crunchy, crumbly topping. It is basically just bloody delicious, so don’t be put off by it’s less than stellar looks.

Crikey – it’s been a busy few weeks! As we speak (?) Pog is lying in bed eating peanut butter toast and drinking black coffee, while I’m lying in bed in my room drinking my second vat of tea and thinking I really must get up. Henry arrived at 4:30am Thursday, (which is basically the middle of the night) sick with a rotten sinus infection, but looking deceptively healthy with a dark tan and sun-streaked hair. Since then I have been guiltily working like a demon but still managed a few hours bargain hunting with him yesterday (excellent purchases), and watching movies on the couch – me with intermittently leaking eyes. While he has been recuperating I was back at My Food Bag (and for the next two weeks – so much fun doing the corporate thing for a change!) and shooting Dish. I am so excited about my next spread, not that I can tell you about it yet, but it’s so pretttttttty… Meanwhile darling Hoob messaged last night to say he had just dislocated his knee – bloody hell, it’s the fourth time, and it happened just while he was stretching. He managed to pop it back in (gross) but it can’t be good. So, flat situation, no ice, but anti-inflammatories and rest on the agenda, while a flat gig raged around him. (Musician flat mates – so cool).

And that’s my news for the moment – I have a rare day off tomorrow to spend with Pog, then it’s styling  at My Food Bag Tues – Thurs and shooting Fairfax on Friday…no rest for the wicked! I hope you’ll give the kedgeree smoked fish pie a whirl and enjoy it as much as I did.

Topping:
Peel and quarter the potatoes and put them in a pot of water. Bring to the boil, reduce the heat to a gentle boil and cook for 20 minutes or until able to be piereced easily with the tip of a knife. Drain off the water and allow the potatoes to dry ou in the hot pot for a minute. Add the milk, allowing the residual heat of the pot to warm it slightly before mashing the potatoes. Add the butter, season well with salt and pepper and continue mashing until soft and creamy. Set aside to cool.

Filling:
Preheat the oven to 180˚C. Melt the butter in a large deep heavy-based pot. Add the mustard seeds and cook for one minute. Add the onion, leek, celery, salt, pepper, zest and bay leaf. Cook, stirring, over a medium/gentle heat for 10 minutes or until the vegetables are softened but not coloured. Add the garlic and cook for 2 minutes. Add the spices and flour and cook, stirring for 1 minute. Add the wine and cook, stirring until it forms a paste with the vegeatbles. Add the milk and cook over a medium heat a further 5-6 minutes until the sauce is thickened and smooth. Add the peas and white fish, cover and cook 5 minutes until the fish is cooked through. Remove from the heat and stir through the smoked fish and boiled eggs. Spoon the mixtture into a baking dish and set aside while you prepare the crumb. Tear the bread into pieces and put in a small food processor with the Parmesan and whiz to combine.

Spoon the mashed potatoes over the filling and spread to cover, making small indents for the crumb to sit in. Sprinkle over the wholemean Parmesan crumb and bake for 35-40 minutes until golden and heated through. 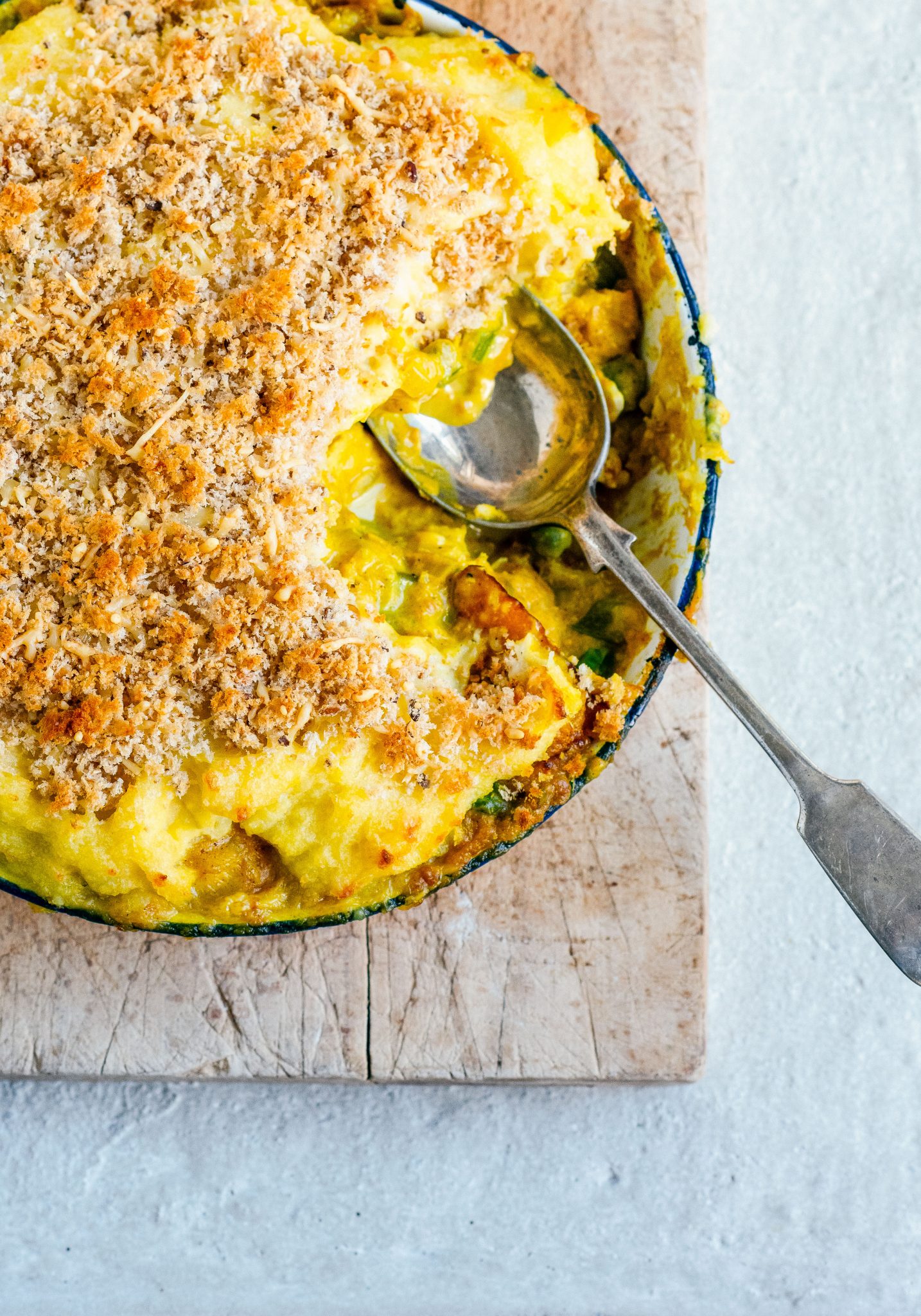