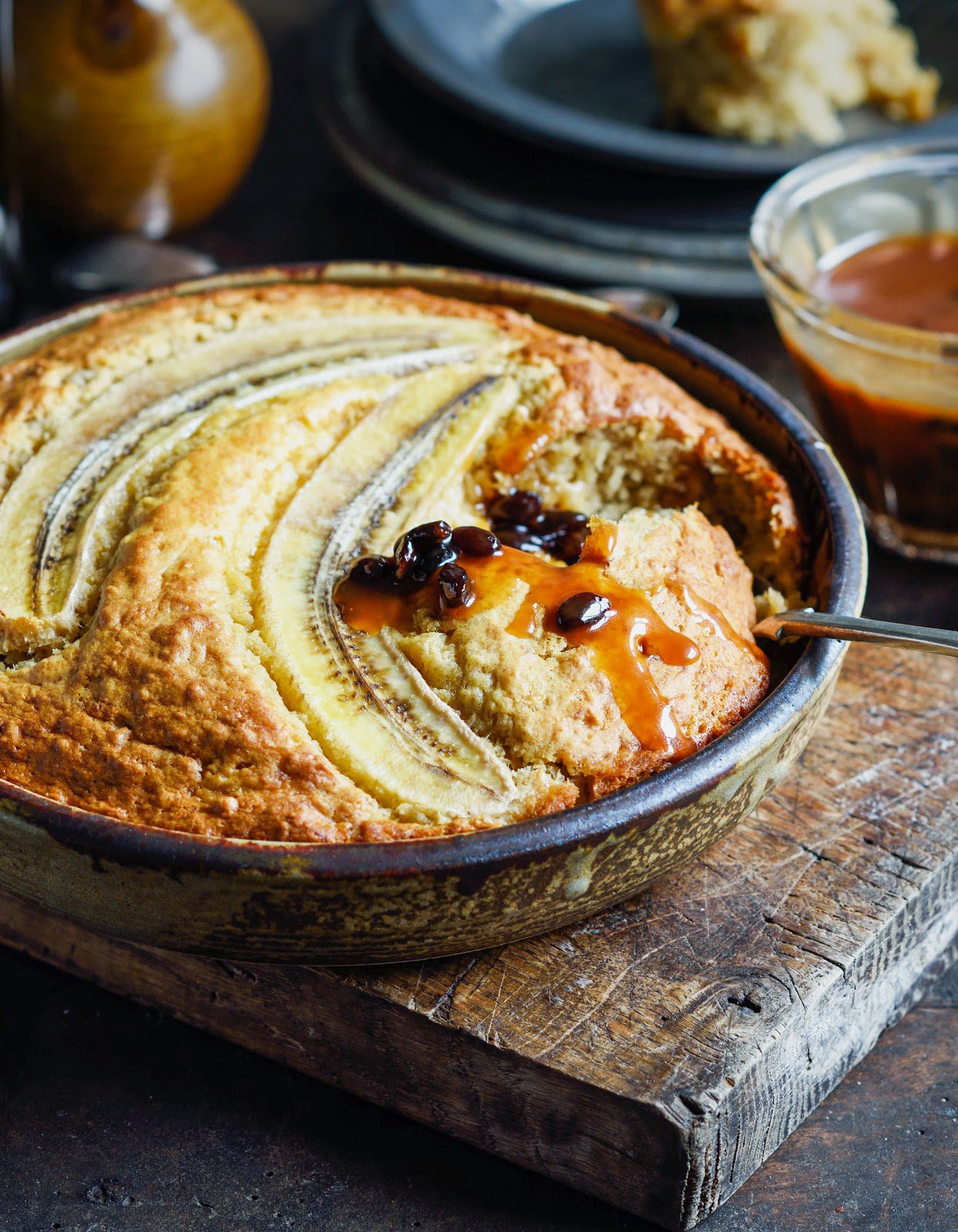 Helloooo from my old blogging ground (bed), with a massive mug of tea. It is bloody freezing outside but shortly it’ll be time to brave the cold and head out for my walk – but first – banana cake pudding with caramel rum’n’raisin sauce. With my Fairfax recipes (as you can imagine) they are locked into a newspaper schedule months in advance, and this combo is one I had been particularly looking forward to sharing. They are both so easy to make, but served together with a generous scoop of ice cream or softly whipped cream, the result is indulgently fabulous. Make sure the cake is cooked through (by testing in the centre with a skewer) before resting for 5 minutes as it can look suspiciously ‘done’ when, not quite.

Right – on the news front – the book is at the printers (a miracle) and we are awaiting the proofs any day. Holy moly, I can’t quite believe it, it seems slightly surreal! Lock September 19th in your diary, the official New Zealand launch date, and I will keep you posted with where you can buy it well in advance (and obvs I will be sharing the cover and a few pages to whet your appetite well before then). Meanwhile it’s business as usual for Pog and Will, hard at work in Melbourne – I can’t wait to see them again, it has been way too long. Hoob is zooming up for two nights on Saturday which will be such a bloody treat (two nights, seems like just a tease)…I do miss my lovelies so much! And me? It’s no rest for the wicked having just finished off my next Cuisine and Fairfax shoots with still loads of work to catch up on and finishing off to do, but at least a slightly more manageable pace. But I have allowed myself the luxury of inviting a crew around to watch the rugby at the weekend, cooking without making notes/testing/photographing is a real treat! Hope all is well where you are, and I’ll see you here again soon…. 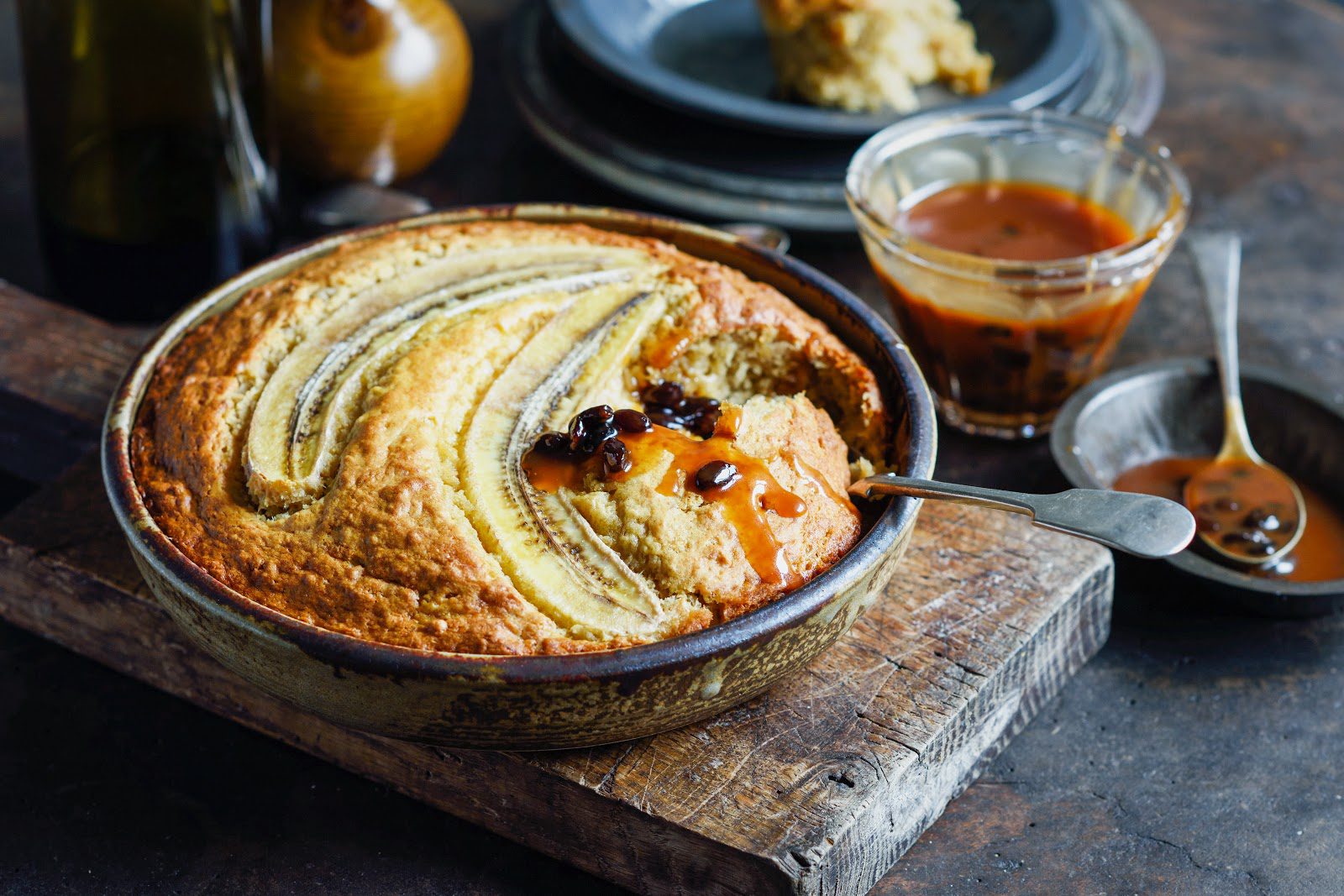 Lightly butter a 23cm round oven-proof dish with the 1 tablespoon of butter and preheat the oven to 180˚C. Beat the remaining butter with the brown sugar in a mixing bowl until soft and creamy. Add the eggs, bananas and rum and beat briefly to combine. Sift in the flour in two lots, folding to combine, then spoon into prepared dish. Place the halved banana, cut side up, on top of the cake batter. Bake for 40 minutes (or until a skewer inserted into the centre of the comes out clean), then leave to sit for 5 minutes before serving with Rum’n’raisin caramel sauce and lashings of vanilla bean ice cream or whipped cream. Serves 8

Rum’n’Raisin Caramel Sauce:
1 cup caster sugar
¼ cup water
½ cup cream
2 tablespoons dark rum
1 tablespoon butter
½ cup raisins
Whisk caster sugar and water together in a pot over a medium high heat. Brush any sugar that has stuck to the pot from the ides with a small brush. Cook, without stirring until the sugar has crystallized white, then turned a light golden amber color. Swirl the pan to ensure even cooking, then as soon as it is pale amber remove from the heat and whisk in the cream – it will froth up madly in a wild way, but just whisk hard then add the rum and butter and whisk again until incorporated. Add raisins and stir to combine. Once cooled pour into a container and store in the fridge. Before serving re-heat gently in a small pot or the microwave. Makes 1 cup