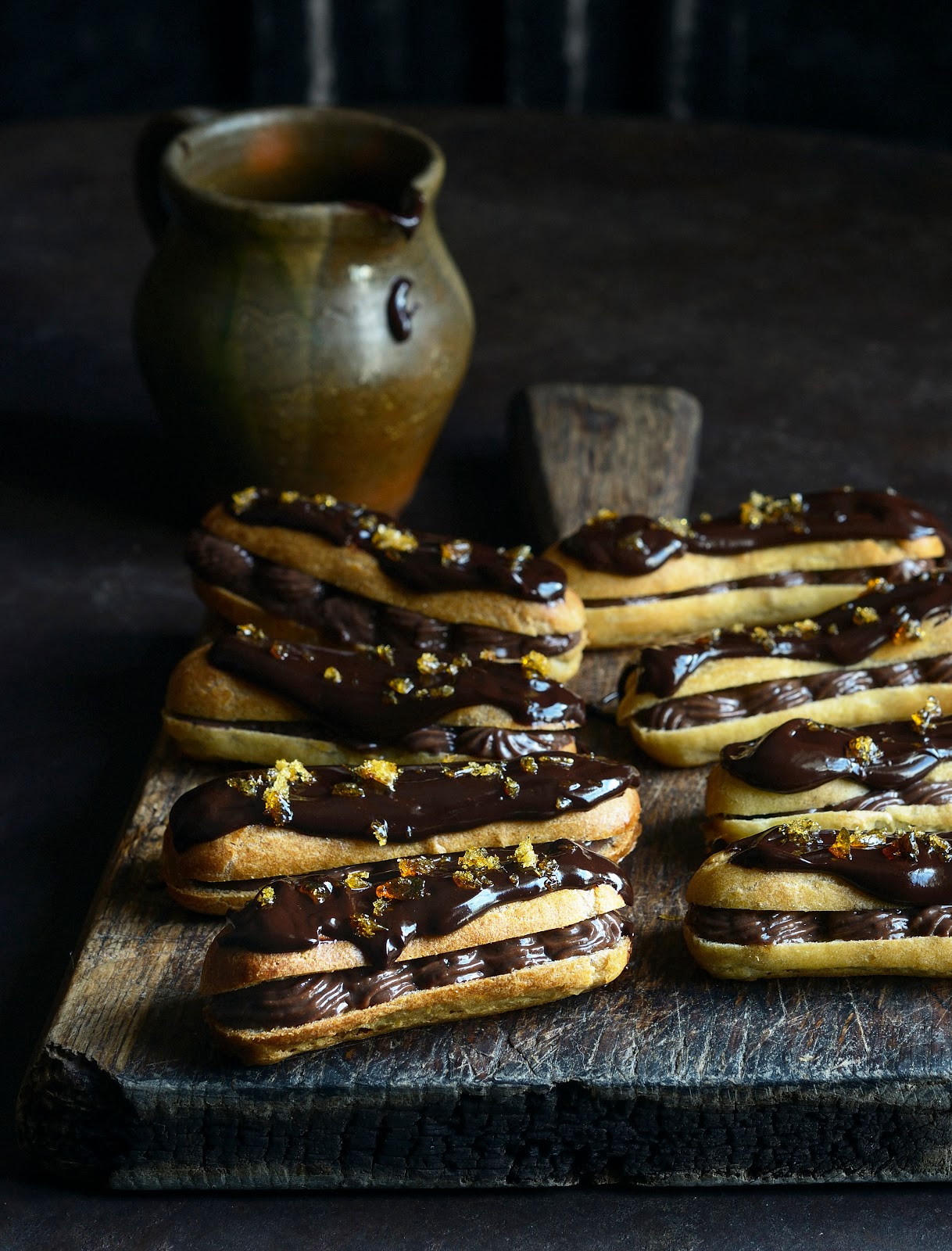 Helloooooo! This is a fab celebration recipe just in the nick of time for celebrations in the lead up to Christmas, and one of my recipes featured in the lovely winter issue of Dish magazine. Making these brought back childhood memories of my mum ferociously beating choux pastry in a saucepan, and while the recipe does require a bit of elbow grease and is not exactly for the faint-hearted, the first bite (not to mention the groans of delight) will make it all worthwhile. It looks really complicated, but if you have a read through you will see that each step is actually pretty easy, it’s just a few steps put together. The recipe makes a lot – so is perfect for a big event like a party, Thanksgiving or Christmas – even a cocktail party, as you could easily make them smaller, or pipe them into profiterole shapes rather than eclairs. I believe you can also successfully freeze the un-filled, un-iced eclairs too, but I would make sure you have let the them to cool competely, and even split them before freezing so that you don’t have to handle them too much on de-frosting…if you give it a try, let me know how it goes!

You will need a piping bag and a 1 ½ cm piping tip for this recipe. Heat the butter and water in a medium saucepan. Cook for 3 to 4 minutes or until the butter has melted and the mixture just starts to simmer. Reduce heat to low. Add flour and cook, stirring constantly with a wooden spoon for 2 to 3 minutes or until the mixture comes away from the sides of the saucepan and forms a ball. Keep cooking for a few more minutes, beating constantly with the wooden spoon until the mix starts to leave a little residue on the base of the saucepan. Take off the heat and add eggs one by one, beating vigorously after each addition until well combined and the mixture forms a glossy dough. The mixture should drop in a big plop from the spoon. (To start with it will seem sloppy and not inclined to mix together, but persevere, it will happen!)Preheat the oven to 180˚C. Line two large baking trays with baking paper. Spoon half of the pastry into the piping bag. The easiest way to do this is to fold the sides of the piping bag down and rest it, tip first in a large glass. Pipe 10cm lengths of pastry onto lined trays, leaving 5cm between each one to allow for spreading. You should have about 28-30 éclairs. Bake for 25-30 minutes until puffed and golden – do not open the oven during cooking or they will collapse! Remove from the oven and pierce on the side with a small knife to release steam, and leave to cool on a wire tray.

Heat the milk in a saucepan over a medium heat until it just starts to simmer. While the milk is warming, whisk together the egg yolks, vanilla extract, sugar, flour, cocoa powder, and cornflour until the mixture is completely smooth. Once the milk is simmering, add the melted chocolate to it and whisk until it is fully incorporated. Add half of the hot chocolate milk to the egg mixture, whisking constantly. Pour the milk and egg mixture back into the remaining hot milk and continue whisking over the heat until the custard is thick and smooth. Remove from the heat, pour into a container, cover the surface with plastic wrap and chill.

Heat the cream in a small saucepan until just simmering. Remove from the heat; add the chopped chocolate and leave to sit for 3 minutes. (Add oil and whisk to combine. If necessary return to the heat briefly, then whisk again until smooth.) Leave to cool for 30 minutes.

Line a small baking dish with baking paper. Heat the sugar and water together in a small, heavy based saucepan. Cook over a medium heat without stirring, until the sugar has dissolved and caramelised, turning a rich golden colour. It starts by crystallising and going white, don’t panic, it will start to caramelise from the outside edges in – as it starts to ‘turn’ you can give the pan a gentle swirl to encourage it. The amount of time varies but can be more than 5 minutes. You must keep an eagle eye on the caramel so that you don’t miss the magical point between golden and perfect, and black and bitter. As soon as you have a light golden amber liquid pour onto the baking paper as it will continue to cook with it’s own heat, and leave it to set hard. Caution: do not put your fingers any where near the caramel, it is viciously hot! Once the praline is cold you can whizz it in a blender or smash it into chunks with the end of a rolling pin – up to you whether you like your praline chunky or fine!To serve, split éclairs lengthwise, either pipe or spoon the pastry cream onto the bottom half, put the top back on and spoon over chocolate ganache. Sprinkle with praline and wait for the applause! Éclairs are best eaten the day of making but can be frozen unfilled. Makes 28-30.